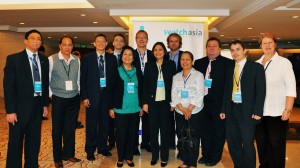 As part of its mainstreaming and partnering initiative, ADFIAP was invited by the EuropeAid Cooperation Office and the SWITCH-Asia Network Facility to participate in the 2nd SWITCH-Asia Networking Meeting held in Beijing, China on October 12-14, 2010 The theme of the meeting was “Advancing Sustainable Consumption and Production in Asia.”

The international event gathered about120 participants including representatives from the SWITCH-Asia funded projects, SWITCH–Asia Network Facility project partners, government officials from Asian countries, officials from the European Commission and its delegations to Asia.

The SWITCH-Asia meeting is held annually to provide a platform for the participants to share their experiences on the ongoing SWITCH-Asia project implementation and exchange views and knowledge on effective replication mechanisms of successful sustainable consumption and production (SCP) practices in Asia. There are 30 projects being implemented under the SWITCH-Asia programme in 15 out of the 19 eligible countries in Asia. The projects are funded by the European Union (EU).

ADFIAP is a partner in one of the three projects under implementation in the Philippines, the SMART Cebu project which aims to increase the competitiveness of small and medium enterprises (SMEs) in 3 sectors in Cebu in southern Philippines by implementing and marketing cleaner production in compliance with SCP standards.

Discussions in the various interactive workshop sessions during the meeting focused mainly on effective replication mechanisms of successful SCP practices in Asia and on good communication practices in dissemination of project results and achievements, especially how the projects can prepare a good exit strategy

ADFIAP was represented in the meeting by Mr. Alberto Reyno of the ADFIAP Consulting group. He was also one of the four panelists during the closing session where he emphasized that to ensure the sustainability of the SCP movement, SMEs must be assisted to become bankable. He explained that most SMEs cannot access formal finance because banks are hesitant to lend to them for a variety of reasons. This situation affects SMEs’ operational sustainability and their ability to adopt processes that are consistent with SCP principles. At the same time he said, banks have to be equipped with the tools they need to evaluate SME projects, identify and mitigate credit risks in SME lending and assess the management competencies of SME managers.