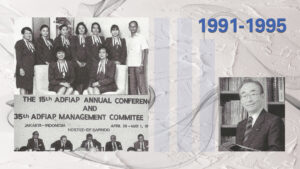 1991
1991 marked several developments for ADFIAP as member DFIs faced a new era of financial systems deregulations worldwide. There was more pressure to emulate commercial banking operations while remaining more independent in funds sourcing. Competitiveness and profitability were the catchphrases of the 1990s, and they were at the heart of the 14th Annual Conference held in Seoul, Korea. The theme was, “DFI Response to the New Challenges of Development Financing in the Asia-Pacific Region”, and specifically addressed how DFIs would continue to operate in a deregulated and liberalized finance environment.
The new ADFIAP International Headquarters was inaugurated in October 1991, with then-Philippine Finance Secretary Jesus P. Estanislao as the guest of honor.

1992
ADFIAP experienced several changes in 1992, the first of which was a change in Chairmanship at the 15th Annual Conference in Jakarta. Chang-Dal Kim, CEO, and President of Korea Technology Banking took over for Mr. S.S. Nadkarni (KTB).
The annual meeting, attended by 48 member DFIs, ITC, and UNIDO, had the theme “Excellence in Development Banking” and identified six parameters that defined excellence: Achievement of development objectives, Management Competence, Good Financial, Good Financial Performance, Quality Service, Workplace Quality of Life, and Good Public Image.

1993
ADFIAP was accredited by the United Nations’s Economic and Social Council as an NGO on Consultative Status.

1994
ADFIAP assumed the Chair and Secretariat of the World Federation of DFIs.

1995
The first issue of the Banking and Finance Digest was published. Mr. Chang-Dal Kim turned over the ADFIAP Chairmanship to Mr. Aswin Kongsiri, President of the Industrial Finance Corporation of Thailand.