Eurasian Development Bank released an analytical report on the Economy of Central Asia: A Fresh Perspective 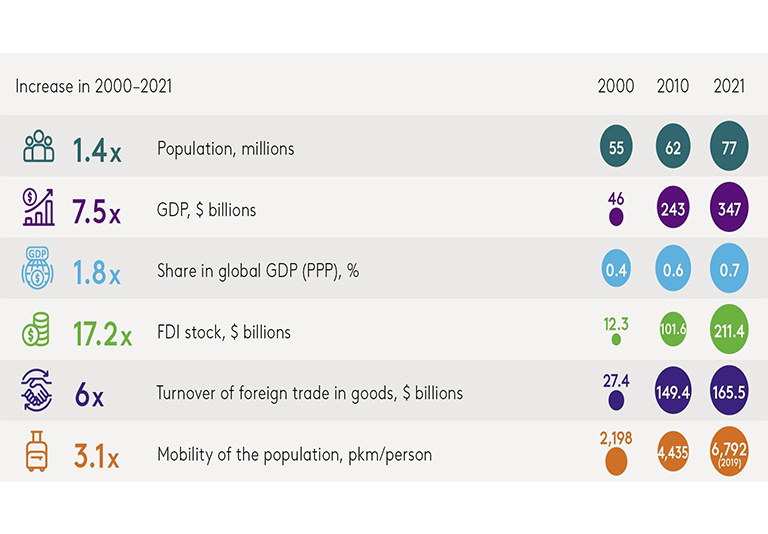 The Eurasian Development Bank research team has released an analytical report titled “Central Asia’s Economy: A Fresh Perspective.” Analysts at the EDB studied the characteristics of the region’s countries, as well as their prospects for cooperation and development.
The report offers a fresh look at Central Asia as a large, dynamic, and promising economic region, examining its current structural changes and major growth areas. It is concerned with structural changes in Central Asian economies. Central Asian countries’ GDP has grown more than sevenfold over the last 20 years, at an average rate of 6.2 percent, faster than in developing countries and more than twice as fast as the global average. Central Asia’s strategic importance in wider Eurasia will grow, as will its importance to its immediate neighbors and key economic partners, Russia and China. The region’s countries have a historic opportunity to capitalize on their transit potential and approach external markets via emerging international transport corridors. Coordinated development of the water and energy complex, including green energy, offers significant growth opportunities. Infrastructure integration initiatives, in particular, have the potential to significantly boost economic growth.

The Eurasian Development Bank is an international financial institution investing in Eurasia. For more than 16 years, the Bank has worked to strengthen and expand economic ties and foster comprehensive development in its member countries – Armenia, Belarus, Kazakhstan, Kyrgyzstan, Russia and Tajikistan. The EDB’s charter capital totals US $7 billion. Its portfolio consists principally of projects with an integration effect in transport infrastructure, digital systems, green energy, agriculture, manufacturing, and mechanical engineering. The Bank’s operations are guided by the UN Sustainable Development Goals and ESG principles.

The Eurasian Development Bank is a recognised leader in applied research on the Eurasian economy. The key activities of the EDB’s research team focus on macroeconomics, regional integration, and infrastructure. The results of its studies are regularly published in macroeconomic reviews describing the current state of the economies and forecasts for the economic development of the region’s countries; reports on infrastructure development; special reports; and integration-related publications.