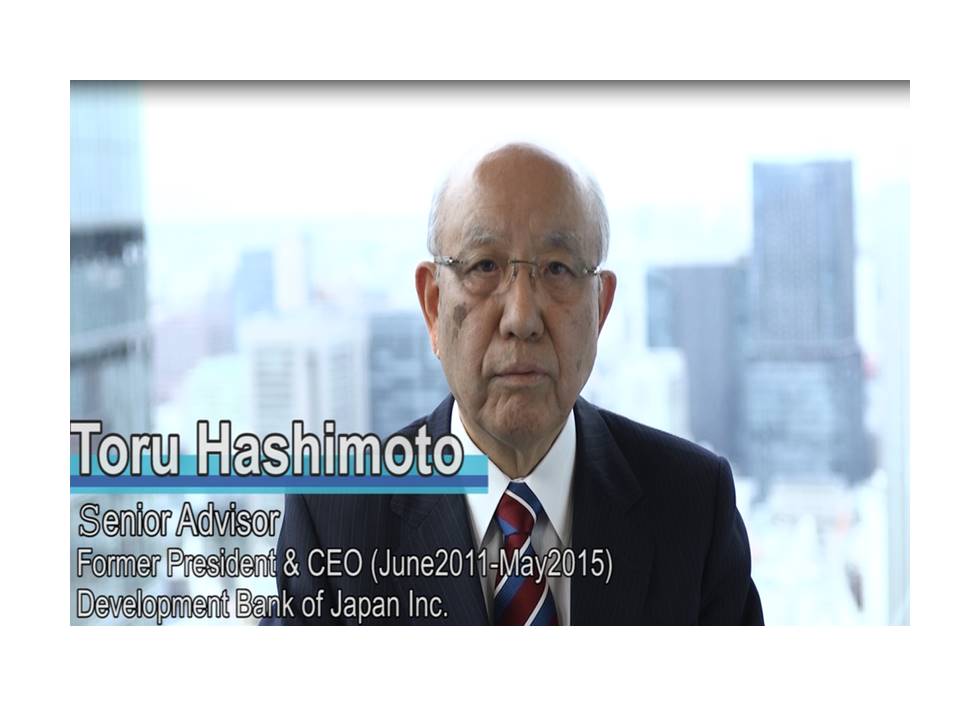 For his sterling performance at the Development Bank of Japan Inc. (DBJ) throughout the period of the most serious crisis in Japan’s post-second world war history, Mr. Toru Hashimoto, former President & CEO of the DBJ (2011 to 2015) and presently its Senior Advisor, has been chosen as this year’s ADFIAP Distinguished Person-of-the-Year awardee.

Mr. Hashimoto was appointed at the helm of the DBJ in 2011 after his recognition as an outstanding international banker for serving as Chairman of the Fuji Bank (currently Mizuho Group) and Deutsche Bank AG. In DBJ, Mr. Hashimoto powerfully and quickly paved the way for the post-earthquake as well as growth strategy of Japan, mobilizing the wisdom and expertise of the Bank as a leading development financial institution in the country, thus progressively drawing a blueprint of DBJ’s roles and functions after privatization.

Three months prior to Mr. Hashimoto’s taking up office in March 2011, the great eastern Japan earthquake with a magnitude of 9.0 devastated the country leaving more than 19,000 people dead and missing. This has caused extensive property damage, calculated for USD200 billion, according to DBJ study, excluding impacts of the Fukushima Nuclear Power Plant accident. However, under the superb leadership of the newly appointed Mr. Hashimoto, armed with urgent survey on the post-earthquake situation and needs, DBJ established the “Rehabilitation Fund” together with four (4) Japanese local banks in each of the earthquake-struck regions in August 2011, in addition to a number of reconstruction support initiatives. The purpose of the Fund is to support earthquake-affected companies through subordinated loans and equity investment, with mechanism to decrease borrowers’ B/S deterioration and ease repayment control.

The “Distinguished Person Award” is a lifetime achievement award given to a person who has, in his or her chosen career, excelled and made a mark in the country or internationally for his or her outstanding accomplishment(s) in the field of development, in general, and in the development banking profession, in particular.