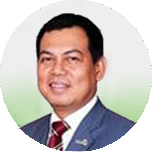 MUAR-born Datuk Ismail Bin Ibrahim received his early education at the Malay College Kuala Kangsar and went on to study town planning at the Heriot-Watt University in Edinburgh, Scotland.

He is registered with the Board of Town Planners Malaysia and started his career in the civil service in 1983 as a town planning officer attached to the Federal Department of Town and Country Planning, Ministry of Housing and Local Government. In 1990 he was awarded the British Council Fellowship to specialise in Planning Law in Newcastle University, England.

In April 2003, he was appointed as Penang State Town and Country Planning Department Director. In February 2006, he was seconded as Khazanah Nasional’s Senior Vice President of Special Projects to oversee the planning of the southern economic region in Johor, known
today as Iskandar Malaysia.

Effective 1 January 2010, Ismail was appointed as the Chief Executive of Iskandar Regional Development Authority (IRDA). His main responsibility is to advise the Prime Minister and Menteri Besar Johor as co-chairmen of the Board of IRDA in planning and implementing the economic, physical and social development strategies to meet the vision of realising the Iskandar Development Region as a Strong and Sustainable Metropolis of International Standing.

Amongst his many achievements in IRDA include securing a total cumulative investment worth RM138 billion for the period 2006 to April 2014 and the successful execution of public infrastructure projects worth RM7 billion for Iskandar Malaysia. He was responsible for coordinating and facilitating public private cooperation to develop Iskandar Malaysia through various programmes such as human capital and entrepreneurship, safety and security, public transportation, housing and the environment.

He is married to Datin Rohana Ismail who serves under the Ministry of Education and they are blessed with three daughters. They live in Kampung Sungai Ramal in Selangor.