Pag-IBIG Fund bags two silver awards at the Stevie® Awards for Women in Business, a first for a Philippine government agency 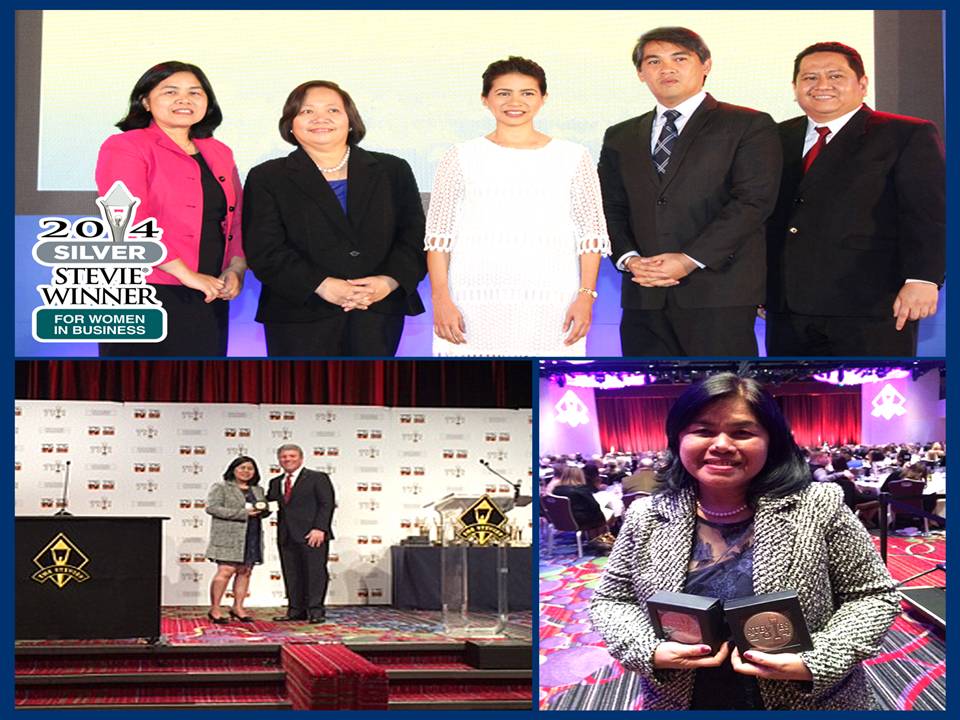 Pag-IBIG Fund achieved twin victories at the 11th annual Stevie® Awards for Women in Business when its President and Chief Executive Officer, Atty. Darlene Marie B. Berberabe, won the silver award as Female Executive of the Year in Government or Non-Profit, and the Senior Management team won a second silver for the Fund as Management Team of the Year at the 2014 awards dinner in New York last November 14.

“The silver Stevie Awards bestowed on me and the Pag-IBIG Fund Senior Management team – composed of myself; the three Deputy CEOs, Emma Linda B. Faria for Support Services Cluster, Ophelia L. Dela Cerna for Provident Operations Cluster, and Acmad Rizaldy P. Moti for Home Lending Operations Cluster; and our Chief Legal Counsel Atty. Robert John S. Cosico – are tremendous recognition for the whole organization and for the Fund. Our members benefit from these international accolades as they are assured of the validation by external judges of all the best business practices we implement internally. Pag-IBIG’s 14.5 million members are the real winners each time our achievements are deemed worthy of commendation by various award-giving bodies, both within the Philippines and internationally, because they are the inspiration behind, and the recipients of, the innovative programs we come up with to continue being a bigger, better, faster Pag-IBIG Fund for the Filipino workers all over the world,” said Atty. Berberabe.

Atty. Berberabe and the Senior Management team were recognized for leading Pag-IBIG to attain unprecedented growth in all aspects, from earning record-high revenues in 2013 to offering responsive programs to its members, including affordable housing programs to low-income earners and low-interest calamity loans for affected members. The team was also lauded for practicing good corporate governance and implementing transparency initiatives as well as gender-sensitive programs.

In the past four years, under the leadership of Atty. Berberabe and the current Senior Management team, Pag-IBIG gave more to its members without increasing the monthly premium of P100. Pag-IBIG doubled maximum loanable amount for housing loans (HL) to P6 million, reduced HL interest rates from 11.5% to 6.9%, provided subsidized HL interest rate to minimum wage earners at 4.5%, and reduced calamity loan interest rate from 10.75% to 5.95%.

Michael Gallagher, founder and president of the Stevie Awards, shared that the judges considered Atty. Berberabe as an “outstanding executive and leader in so many ways, with an extensive background and wide-ranging public service experience as well as in academic and private sectors.” The Senior Management team was deemed to have brought about “strong results across the board, including cost containment and expanding reach of the organization’s impact.”

More than 1,200 nominations from individuals and organizations of all sizes and in virtually every industry from 22 nations and territories were submitted this year for consideration in more than 90 categories. More than 160 professionals around the world participated as preliminary and final judges.

“In the 11 years of the Stevie Awards for Women in Business, we have never had as many impressive women entrepreneurs, organizations, and executives nominated as we did in 2014. Their stories of success and innovation will be an inspiration to women around the globe who dream of starting and growing a business and making a difference,” said Mr. Gallagher.

There were two other awardees from the Philippines: ABS-CBN Corporation’s President and CEO Charo Santos-Concio and Mosman NewMedia’s President Jena F. Fetalino won a Gold Stevie each as Female Executive of the Year in Asia, Australia, or New Zealand, and in Business Services with 10 or less employees, respectively.