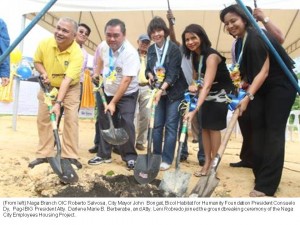 NAGA CITY- Top officials of Pag-IBIG Fund recently inaugurated a P12 million-housing project here for city employees in partnership with the local government and an NGO.

“I’m proud to say that Naga is our first LGU housing [project] in Bicol. Pag-IBIG Fund will provide funding for the development of the project. We will also help the beneficiaries buy the units by lending to them at a low 4.5 percent interest per annum,” said CEO Atty. Darlene Marie B. Berberabe.

She added that the project is the first of its kind, since the agency partnered with the Naga City government and the Bicol Habitat for Humanity. The city government handed the land while Habitat is in-charge of construction and house design.

“This is one of the priority projects of the local government. If our local government employees help the public, it is but fitting that we should also help them. In order to further motivate them to work harder and deliver better services to the general public,” said Mayor John Bongat.

The first phase of the housing complex will include a park and playground in a sprawling 4040 square meter lot in Barangay Del Rosario here. Each unit will have 21 square meters in floor area and will be built on a 60 square meter lot. The houses are estimated to cost around P 263,000 each.

“It would have been a more pleasant day if my husband was here to witness today’s event. It is well known among the employees of city hall the passion of my husband for housing. Several attempts were made, but ultimately those did not push through. I’m happy that at last the employees housing will be realized. I have no doubt that the project will be a success since three reliable institutions are working on it together,” she said.

Bob Ursua, the Vice President of the employee’s union, thanked Pag-IBIG Fund in behalf of the 48 beneficiaries of the project.

“Our sincerest thanks go to our partner agency the Home Development Mutual Fund for collaborating with the local government of Naga for this laudable project and for helping realize every [poor] city employee’s dream to have a home of their own,” he said

The second phase of the project will produce 100 more houses in the area. And soon, Pag-IBIG Fund-subsidized communities will rise in Tigaon town and Ligao City in Albay