Posted on July 11, 2016. Filed under Association News. Be the first to comment. 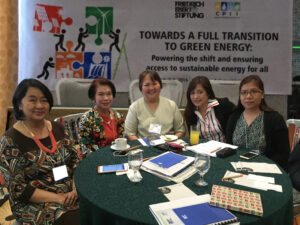 On invitation by the Center for Power Issues and Initiatives (CPII) and the German foundation, Friedrich-Ebert-Stiftung, ADFIAP attended the conference entitled “Towards a Full Transition to Green Energy: Powering the Shift and Ensuring Access to Sustainable Energy for All” held on July 8-9, 2016 at the Hive Hotel, Quezon City, Philippines.

The objectives of the event included a review of the current energy situation in the Philippines; an assessment of the prospects of transitioning to green energy in the Philippine setting; and consensus-building on a renewable energy future for the Philippines. The conference also intended to create a citizen’s platform for energy transformation that would address gaps that hinder full development of renewable energy in the country and for discussions, review and proposals, among others, on laws, policy, regulatory framework or implementation aspects.

Topics discussed were “The State of the Philippine Electricity Sector”; “Renewable Energy in the Philippines”; “Possibilities of 100% Renewable Energy for All New Electricity Demand”; and “Just Transition to Environmentally Sustainable Economies”. Resource speakers included experts, practitioners and the academe who are extensively and deeply involved in renewable energy and in power sector issues, such as Prof. Rowaldo del Mundo, Electrical and Electronics Engineering Institute, UP Diliman; Mr. Gaspar Escobar of the Renewable Energy Management Bureau; Mr. Roberto Verzola, Executive Director of the Center for Renewable Electricity Strategies; and Mr. Red Constantino, Executive Director, Institute for Climate and Sustainable Cities. Panel of reactors were Ms. Maitet Diokno, Executive Director of CPII; Ms. Grace Yeneza, Managing Director of Preferred Energy, Inc.; Mr.Wilson Fortaleza, Fellow of CPII; and Mr. Albert Dalusung III of the National Renewable Energy Board. The conference was capped by a workshop on “Getting TheRe: Building Consensus on Elements of a Citizens’ Energy Platform”.