Posted on March 22, 2016. Filed under Association News. Be the first to comment. 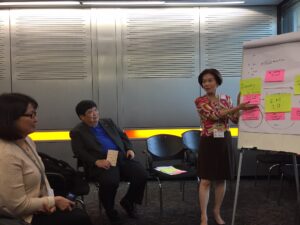 ADFIAP was invited to participate in the Practitioners’ Dialogue on Climate Investments (PDCI) held on March 15-18, 2016 at the Innovation Hub in Pretoria, South Africa with 65 attendees from national government, academe, business and financial sectors from 22 countries. The event was organized by Germany’s international cooperation organization, GIZ GmbH, in cooperation with SEED South Africa Symposium.

This was the second dialogue, with the first edition held in Jakarta, Indonesia last October 8-9, 2015 that provided an international platform for presenting and discussing policy approaches, financial mechanisms and public-private cooperation models to mobilize private investment in renewable energy projects, energy efficiency improvements and adaptation measures.

Building on the results of the Jakarta event, the PDCI in 2016 will focus on the design, analysis and implementation of actual prototypes of policy instruments, cooperation models and strategies to unlock private investments in climate protection and adaptation to climate change. The participants in the second edition established working groups in four focal areas: (1) implementing climate resilience measures in industry (2) creating markets for off and mini-grid renewable energy solutions (3) promoting sustainable banking regulations to catalyze private climate investments and (4) supporting energy efficiency improvements in industrial production.

During the kick-off event of the PDCI 2016, participants of the working group further developed ideas for prototypes and policy briefs and shared their experiences in the multi-sectoral working groups. Discussed were the next steps of the working process and planned the implementation of their prototype solutions.

Mr. Victor Abainza, ADFIAP Senior Consultant and Ms. Cora Conde, Head of ADFIAP Consulting, participated as policy authors on seven (7) prototypes in Working Group 4 on supporting energy efficiency improvements in industrial production. Each working group was composed of prototype developers, policy authors and advisors. The working group members will continue their collaboration through webinars with the objective of coming up with refined prototypes and draft policy briefs for presentation and discussion in the next PDCI in Bonn, Germany on May 23-25, 2016.