Posted on December 29, 2016. Filed under Association News. Be the first to comment. 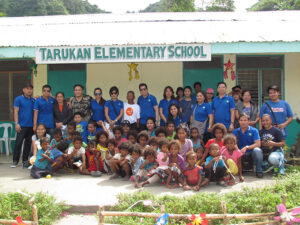 During the Christmas holiday break, the ADFIAP Secretariat in Manila visited an indigenous Aeta community in Capas, Tarlac in northern Philippines to share with the residents there, gifts and in-kind donation from the families of the secretariat staff and consulting team. The contribution consisted of clothes, slippers, educational materials, apples and toys for children.

The Aetas of Capas, Tarlac province are among the 12 to 15 million indigenous peoples in the Philippines. Before the 1991 eruption of Mt. Pinatubo, the Aeta communities were spread around the province. The volcanic eruption greatly affected them. They were forced to leave their homes and evacuated to resettlement areas. After a decade or so, they returned back to their ancestral lands and started rebuilding their communities.

The community that the Secretariat went to is located in Sitio Tarukan, Barangay Sta. Juliana in the town of Capas, province of Tarlac, about 110 kilometers north of Manila. (Note: A sitio in the Philippines is a territorial enclave that forms part of a barangay, which is the smallest administrative division in the country and is the native Filipino term for a village, district or ward). Sitio Tarukan is situated on a hill (‘taruk’ in the local dialect means high ground) and has 70 families of about 210 young and adult persons.

Going to the community is not “a walk in the park”, so to speak, as the Secretariat team had to travel aboard 4X4, 6-passenger-max vehicles crossing about 20 kilometers of lahar-covered rough terrain and finally trekking by foot to reach the hill-top community.

At the site, the Secretariat was cordially welcomed by the residents and were presented a native dance number as a way of receiving the team. For its part, the Secretariat organized a programme of dances, songs and games to the delight of children and adults alike.

The programme was capped with a word of gratitude from the community chieftain, Mr. Lito Diaz, who appreciated the team for their donations and for their effort of visiting their remote community. ADFIAP Secretary General, Mr. Octavio B. Peralta, on behalf of the Secretariat, also thanked the whole community for their warm and hospitable welcome.

This special outreach program of the Secretariat, while largely symbolic, is a simple and meaningful way of giving back to the indigenous communities located in the remote areas of the country and sharing with them the blessings of love and giving.