Posted on July 6, 2011. Filed under Association News. Be the first to comment.

Priority for funding are projects that: (a) specifically and significantly
contribute to promoting regional economic integration via free and open
trade investments (b) directly support the action plan in the APEC Leaders’
Growth Strategy, and (c) are linked to other priorities identified by APEC
Leaders and Ministers. 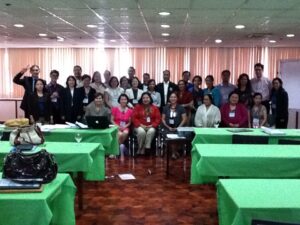 is a forum for 21 Pacific Rim countries that seek to
provide free trade and economic cooperation throughout the Asia Pacific
Region.

AC’s Ms. Cora Conde and Ms. Arlene Orencia participated in the workshop
which required the writing and submission of a concept note from ADFIAP.