Posted on October 23, 2012. Filed under Association News. Be the first to comment. 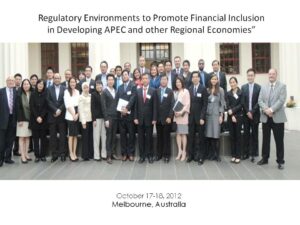 The forum is the first of a two-part program involving regulators and supervisors building on best regulatory practices relating to proportionate regulation identified in the work undertaken by AASC and regional economies to facilitate financial inclusion. Among other issues, the forum addressed potential tensions between regulation and financial inclusion, the incentive structure of banks, capital markets and microfinance institutions, and measures to encourage technology and innovation in the delivery of financial services to the underserved sector through major utilities and mobile phones. An analysis and a report on the forum outcomes will be prepared with recommendations on regulatory reforms to be submitted to APEC and ASEAN leaders and, at the same time, be taken forward into the second part which will be an intensive 3-day workshop to be held in the first quarter of 2013.

AASC https://www.apec.org.au/ is a leading centre in the Asia-Pacific region in terms of advocacy of APEC’s objectives of promoting open trade and investment, structural reform and regional integration through training programs, supporting institutional capacity building, symposia, dialogues and publications while ADBI https://www.adbi.org/ helps build capacity, skills, and knowledge related to poverty reduction and other areas that support long-term growth and competitiveness in developing economies in the Asia-Pacific region.