Posted on October 22, 2013. Filed under Association News. Be the first to comment. 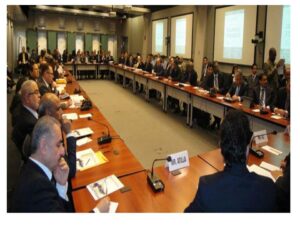 As part of its commitment as founding member of the World Federation of Development Finance Institutions (WFDFI), ADFIAP, represented by its Secretary General, Mr. Octavio B. Peralta, attended the WFDFI Board of Governors (BOG) meeting and its annual forum held on October 11, 2013 at the University Club and the World Bank main premises in Washington, D.C. , respectively. The BOG comprises of the Secretaries General of the four regional members of the WFDFI, namely, AADFI (Africa), ADFIAP (Asia-Pacific), ADFIMI (members of the Islamic Development Bank) and ALIDE (Latin America and the Caribbean).

This year’s forum, jointly organized by the World Bank, the Islamic Development Bank and the WFDFI, was on Islamic finance and was participated in by over 100 attendees from mostly financial institutions around the world which also attended of the World Bank/IMF Annual meetings held in the U.S. capital.

The WFDFI www.wfdfi.net is the global focal point for institutions providing and promoting sustainable development finance. Founded in June 13, 1979 in Zurich, the WFDFI covers 328 member-institutions in 154 countries and territories around the world. Its vision is to be the world’s preeminent knowledge and advocacy network on sustainable development finance.