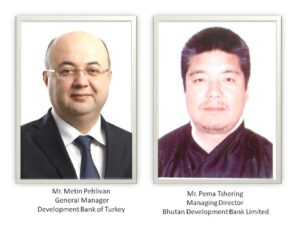 The ADFIAP Board, in its 78th Meeting in Manila, Philippines on December 3, 2013, has elected two Vice Chairmen – Mr. Metin Pehlivan, General Manager of the Development Bank of Turkey and Mr. Pema Tshering, Managing Director of the Bhutan Development Bank Limited. Under the ADFIAP constitution, the Board’s officers are composed of a Chair, not more than 3 Vice Chairs and a Treasurer.

Mr. Pehlivan graduated from Ankara University, Faculty of Political Science, Department of Business Administration in 1991. He started his professional career as Assistant Inspector in the Bank in 1992 and as Deputy Manager, Corporate Loans Department from 2000 to 2006. He was Group Head in Corporate Marketing Department from 2006 to 2007 and Branch Manager from 2007 until 2009. He has been the Deputy CEO of the Bank since September 2009 and holds the position of Acting General Manager since March 2011. Mr. Pehlivan is currently in charge of Legal Issues, Credit Marketing, Human Resources and Information Technologies Departments. Throughout his career, he attended several international workshops and conferences.

Mr. Tshering finished his Masters Degree in International Affairs (Economic Policy Management) at the School of International & Public Affairs in Columbia, New York, USA in 1996. He finished his Bachelor’s Degree in Commerce at the Sherubtse College Kanglung Delhi University in New Delhi India in 1989. He is a Member of the Board of the Royal Security Exchange of Bhutan (RESB) and Chairman of the BDB Securities Limited. He is also a Member of the Board of the Financial Institutions Training Institute. He worked as CEO and Executive Director of the Royal Insurance Corporation of Bhutan (RICB) and had a long stint with the Royal Monetary Authority of Bhutan (Central Bank) where he rose from the ranks until he became the Deputy Managing Director, Policy and Programs in 2007. He also worked with the International Monetary Fund (IMF) in 1996 to 2005 where he was an Economist. Mr. Tshering also worked as a Member of the Government Working Committee to formulate and institutionalize the National Pension & Provident Fund for the Royal Government. He also participated as Chairman of the Financial Sector Task Force to conduct a preliminary study to develop conceptual framework to establish the existing Credit Information Bureau in Bhutan.