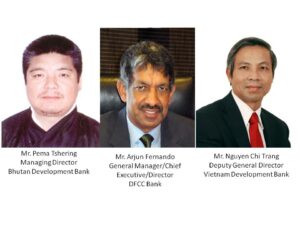 Mr. Tshering is a consummate banker who brings with him a vast of experience in the field of banking and finance. He started his career with the Royal Monetary Authority (RMA) of Bhutan in 1991 as a Trainee Officer of the Banking Division and was promoted as Assistant Banking Officer the same year. His sterling performance with RMA had him promoted as Banking Officer, Banking Division in 1991 to 1995; Division Chief, Financial Institutions Regulation & Supervision Division, January 1997 – June 2004; Division Head, Foreign Exchange Operations & Reserve Management Division, July 2004 – April 2007 (with 2 years break in between at IMF, as Economist); and Deputy Managing Director, Policy & Programs Dept., from May 1, 2007 – August 31, 2007.

Apart from being the present Managing Director of the Bhutan Development Bank and Chairman of ADFIAP, Mr. Tshering is also a Board Member of the Financial Institutions Training Institute and Director of the Royal Security Exchange of Bhutan.

Mr. Arjun Fernando holds 29 years of experience in the banking and financial services industry in executive and managerial positions. Prior to joining the DFCC Bank in August 2012, he was the Regional Head of Change Delivery (commercial banking, trade and supply chain), HSBC Asia Pacific, based in Hong Kong covering 22 countries.

Apart from being the CEO of DFCC Bank, he also holds directorship and chairmanship with the following subsidiary companies of the DFCC Bank: DFCC Vardhana Bank PLC; DFCC Consulting (Pvt) Limited; Lanka Industrial Estates Limited; and Synapsis Limited. Mr. Fernando is also the Chairman of Acuity Partners (Pvt) Ltd and Director of Acuity Stockbrokers (Pvt) Ltd. He is also the Chairman of Lanka Ventures Limited and Director of the Credit Information Bureau of Sri Lanka, and Director of Home Finance Co Ltd, Fiji.

He holds a B.Sc. Engineering degree from the Southern Illinois University, USA and a M.Sc. in Management from Clemson University, South Carolina, USA. He is also an Associate of the Institute of Financial Studies (Chartered Institute of Bankers), UK. He is a former Sri Lanka National Tennis Champion, a gold medalist at the SAF Games in 1991 and captained the Sri Lanka Davis Cup Team from 1983-1990 and is the holder of 19 national titles.

VDB’s Mr. Nguyen Chi Trang brings with him vast of experiences not only in the banking and finance field but also from the military and other private companies. Mr. Nguyen served the Vietnam army from 1980 to 1984, and after his stint in the army, he worked with the Import and Export Company of Ha Nam Ninh, Department of Trade and Tourism of Ha Nam province, Department of Capital and State Property Management in Nam Ha district, and Vietnam Auditing Company.

Mr. Nguyen was appointed as Deputy General Director of the VDB in 2007 (up to present) and he was in charge of the following departments: Development policy; International cooperation; Foreign capital management; Finance and accounting; Guarantee; Customer Center; Information technology center; Payment Center; and Post investment Subsidy.