Posted on December 1, 2021. Filed under Association News. Be the first to comment. 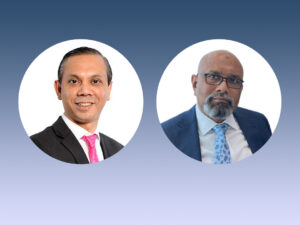 The ADFIAP Board of Directors, during its 92nd meeting on October 27, 2021, via zoom has elected Mr. Mominul Islam, Managing Director, and  CEO of IPDC FINANCE LTD, and Mr. Saud Minam, Chief Executive Officer of Fiji Development Bank as two new ADFIAP Vice-Chairs.

CEO and Managing Director of IPDC, Bangladesh’s leading non-banking Financial Institution, and currently on his third term, Mominul Islam is a transformative leader securing the position of CEO of IPDC in 2012 at the age of 35, making him the youngest CEO even in the country’s financial sector.

His transformational leadership was recognized in 2019 by the Association of Development Finance Institutions in Asia and the Pacific (ADFIAP) as he was awarded Outstanding CEO Of the Year.  He also won the Premier Performers Club Award at American Express, was included in the Global Talent Pool, and in the High Performers team at Standard Chartered.

As a Graduate of the Australian Institute of Company Directors and Bachelor of Computer  Science from the University of North Texas, USA, he has a deep passion for financial technology and digital progression.

Mr. Minam is a Chairman of the Young Entrepreneurs Scheme (YES), and President of the  Institute of Bankers in Fiji. He is also a member of the Fiji Australia Business Council.