Posted on October 31, 2013. Filed under Association News. Be the first to comment. 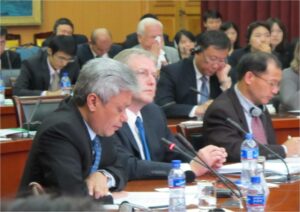 In his presentation, Datuk Wan stressed the need of good quality infrastructure as a fundamental component for sustainable development. “One of the impediments to growth in various developing nations is the unavailability of proper infrastructure to meet the needs of the rapidly growing population” Datuk Wan stated. He cited as an example the Northeast Asia (NEA) region, located in one of the most dynamic and fastest part of the world, which needs a comprehensive infrastructure development to sustain its economic growth.

Datuk Wan also cited the Malaysian government’s persistent drive to develop and upgrade its infrastructure that had resulted in it having one of the most well-developed infrastructures among the newly-industrializing countries in Asia. He enumerated some of its infrastructure development undertaken and work in progress, namely, extensive network of highways, efficient seaports, established airports, developed industrial parks, specialized parks, and high-tech telecommunications.

In closing, Datuk Wan explained that infrastructure development is long-term plan requiring huge capital layout and resources especially human capital and a full support and backing of the government as well as the private sector, the financial institutions and the people who are the stakeholders and beneficiaries.

The GTI, originally known as the Tumen River Area Development Programme, is an intergovernmental cooperation mechanism among 4 countries – China, Mongolia, Republic of Korea and Russian Federation – which is supported by the United Nations Development Programme (UNDP).