Posted on May 6, 2014. Filed under Association News. Be the first to comment. 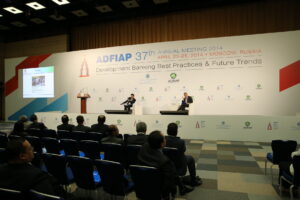 ADFIAP held its 15th Extraordinary Meeting of the General Assembly (GA) on April 23, 2014 in Moscow Russia, in conjunction with the 37th Annual Meetings which was also held there. ADFIAP Chair Datuk Wan Azhar Wan Ahmad presided over the Meeting.

The GA approved and ratified the following: (1) the minutes of the 20th Ordinary Meeting of the GA held on May 22, 2013 in Ulaanbaatar, Mongolia, (2) the audited financial statement of the Association for the year ending December 31, 2013, (3) honorary membership of Mr. Nihal Fonseka, former General Manager/CEO/Director of DFCC Bank Sri Lanka and long-time ADFIAP Board Member and former Chairman (4) welcomed 4 new members and (5) noted the achievement report by the Secretariat during the year 2013.

The GA is the highest body that meets every two years to elect the Board of Directors of the Association and passes upon organizational matters. It consists of duly-authorized representatives of each of the development financing institutions which are voting members of the Association.

After the GA meeting, two special presentations were held: (1) “Development Banking and SME Support Practices of the International Investment Bank (IIB) by Mr. Nikolay Kosokov, IIB Chairman and (2) a video on “Sustainable Progressive Action for Revitalization of Communities (SPARC).