Posted on June 14, 2007. Filed under Association News. Be the first to comment. 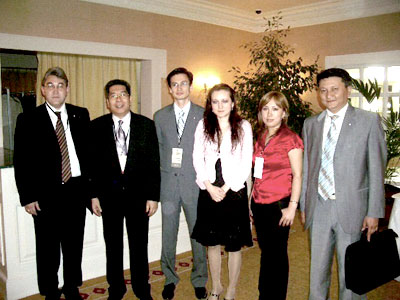 ADFIAP, represented by its Secretary General, Mr. Octavio B. Peralta, participated and spoke during the conference on public-private partnership hosted by its member-bank, the Development Bank of Kazakhstan. Over one hundred delegates from European and Asian organizations attended the event that was opened by the Prime Minister of the Republic of Kazakhstan, Mr. Karim Masimov.

The forum under the theme, “Public Private Partnership as a Factor of Economic Development”, dissected policy, legal, and institutional frameworks of PPP as an effective tool for national economic development. PPP has been considered as an effective way of attracting investments and technology to infrastructure and social sectors all over the world such as in transportation, energy, education, medicine, financial sector, public order and security, tourism, various municipal services, telecommunications, ecology and others.

Mr. Peralta presented the current situation of development finance in the Asia-Pacific region as well as shared with the delegates PPP practices and experiences of some ADFIAP member-institutions. The event was held on May 31, 2007 at the Rixos Hotel in the Kazakh capital city of Astana.