Posted on December 19, 2013. Filed under Association News. Be the first to comment. 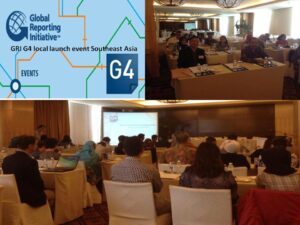 On the invitation of the Global Reporting Initiative (GRI) as a vital Organizational Stakeholder (OS) Member in the region, ADFIAP, represented by its Knowledge Management Head and Sustainability Officer, Mr. Enrique Florencio, attended the launching of the Global Reporting Initiative (GRI) G4 Guidelines on December 17, 2013 at Hotel Mulia in Jakarta Indonesia. Over a hundred delegates from the corporate reporting community and other stakeholders from Southeast Asia attended the special event.

The G4 is the enhancement of the G3.1 which focuses mainly on the materiality (the threshold at which topics or indicators become sufficiently important that they should be reported) aspect of sustainable reporting. Its main objectives are to: (a) offer guidance in a user-friendly way so that new reporters can easily understand and use the Guidelines (b) improve the technical quality of the Guidelines’ content in order to eliminate ambiguities and differing interpretations for the benefit of reporters and information users alike (c) harmonize as much as possible with other internationally-accepted standards (d) improve guidance on identifying ‘material’ issues – from different stakeholders’ perspectives – to be included in sustainability reports (e) offer guidance on how to link the sustainability reporting process to the preparation of an Integrated Report aligned with the guidance to be developed by the International Integrated Reporting Council (IIRC).

The G4 was first launched in Amsterdam and this is being rolled out in the different parts of the globe as part of GRI’s mission.