Posted on February 24, 2011. Filed under Association News. Be the first to comment. 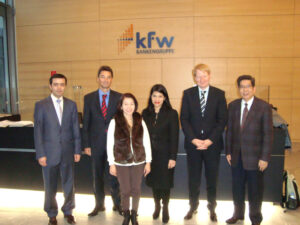 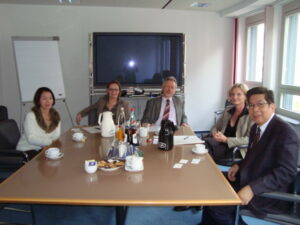 During its SMART Cebu study mission in Germany, the ADFIAP delegation of Mr. Octavio B. Peralta, Secretary General and Ms. Cora Conde, ADFIAP Consulting Group Head, met with KfW officials in Frankfurt to update each other on recent developments and thrusts of their respective institutions.

In a separate meeting with Messrs. Christoph Tiskens, Haje Schutte and Salih Vildirim, Director, Division Chief and Senior Officer, respectively, of KfWs’s Corporate Strategy Investments and International Finance, the group discussed the activities and projects of the World Federation of Development Financing Institutions (WFDFI) and possible cooperation between the two institutions. ADFIAP is currently the Secretariat of the WFDFI.

KfW www.kfw.de is one of the leading and most experienced promotional banks in the world. It applies its knowledge and energy to sustainably improve economic, social and ecological living conditions and finances economic and social progress in developing and transition countries so that people may have better lives.