ADFIAP mourns the passing of its two founding fathers

Posted on April 10, 2013. Filed under Association News. Be the first to comment. 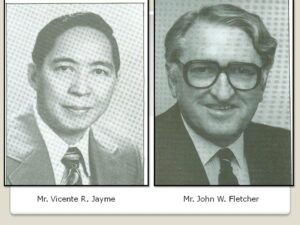 ADFIAP Founding Chairman, Mr. Vicente R. Jayme, passed away on April 3, 2013 at the age of 85. Mr. Jayme served the Association as Chairman from its inception in 1976 to 1986. He was instrumental in the forming of ADFIAP which all started with his vision of “a common philosophy of self-reliance founded on development financing” that provided the impetus for DFIs to band together and eventually form a regional association to enhance the attainment of their common objectives.

So at the 6th Regional Conference of Development Financing Institutions of Asia and the Pacific in 1976 under the auspices of the Asian Development Bank (ADB) that ADFIAP was born. 31 DFIs attending the ADB conference in Manila jointly signed a memorandum of agreement to adopt the constitution of a non-stock, non-profit organization that came to be known as the “Association of Development Financing Institutions in Asia and the Pacific (ADFIAP)”.

Mr. Jayme’s successor as ADFIAP Chairman was Mr. John W. Fletcher from 1986 to 1988. John died on February 2, 2013. He was Chief General Manager of the erstwhile Commonwealth Development Bank of Australia. As ADFIAP Chairman, he was credited, among others, with sealing a 4-year Swiss government and UNDP grant-funded project with the Geneva-based International Trade Centre (ITC) on equipping ADFIAP member-DFIs’ lending officers with skills in export-oriented joint ventures as well as project identification, supervision and rehabilitation. John was also a strong advocate for development finance, particularly in supporting small and medium enterprises (SMEs).

ADFIAP joins its partners and friends in mourning the demise of these two fine gentlemen of development finance and salutes their contribution to the Association and their countries.