Posted on October 5, 2020. Filed under Association News. Be the first to comment.

ADFIAP, which was founded on October 1, 1976, celebrated its 44 years of existence with a simple ceremonial tribute to its founding Secretary General, Orlando P. Pena, who passed last August 18, 2020.

ADFIAP’s charter was signed by 31 founding development finance institution-members attending the 6th Regional Development Banking Conference held under the auspices of the Asian Development Bank (ADB). The following year, ADFIAP was registered as a non-profit organization under the corporation law of the Philippines regulated by the Securities and Exchange Commission.

The ADFIAP Management Council (the precursor of the present Board of Directors) designated Manila as the permanent headquarters of the Association, with then Private Development Corporation of the Philippines (PDCP) as host of the Secretariat and its President, Mr. Vicente Jayme, elected as ADFIAP Chairman. Mr. Orlando P. Pena was named Secretary General who started building the Association up from its inception.

The virtual tribute was attended by past and present ADFIAP Secretariat officers and staff, Mr. Pena’s close family, and a few of his friends from overseas – Messrs. Tarik Kivanc, Sailendra Narain, Zigham Rizvi and Victor Barrios. Mr. Ricardo Palma from Lima, Peru sent his written tribute. 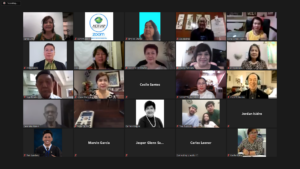