Posted on June 1, 2015. Filed under Association News. Be the first to comment. 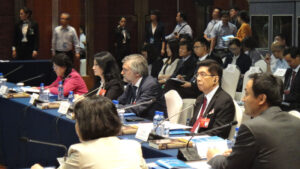 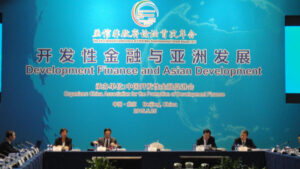 On invitation by China Development Bank (CDB) and as organized by the China Association for the Promotion of Development Finance (CAPDF), ADFIAP, represented by its Secretary General, Octavio B. Peralta, participated in the 1st Conference on Interaction and Confidence-building Measures in Asia (CICA) Non-governmental Forum and spoke before about a hundred delegates attending the “Roundtable Panel on Development Finance and Asian Development”.(Note: The CICA conference itself was attended by more than 300 delegates from different countries in Asia). Mr. Peralta focused his presentation on the history, role and challenges of DFIs from the perspective of ADFIAP and its members. The event was held on May 25-26, 2015 at the Beijing International Hotel and Convention Center.

The roundtable panel was aimed at achieving an agreement on common principles among development finance institutions (DFIs), promote mutual trust and cooperation and industry-finance integration, safeguard financial stability and security, and facilitate security and sustainable growth in Asia through concerted efforts. During the event, the Global Development Finance Development Report which analyzes the development trends of DFIs around the globe was also released.

The CAPDF is a non-profit social organization co-founded by CDB and several other financial institutions, enterprises and government institutions and commits itself to pushing forward development financing research and model innovations as well as market, credit and institutional development and to promoting mutual trust and cooperation among DFIs. CAPDF is led by Mr. Chen Yuan, Vice-chairman of the National Committee of the Chinese People’s Political Consultative Conference and the former chairman of CDB.