Posted on November 10, 2014. Filed under Association News. Be the first to comment. 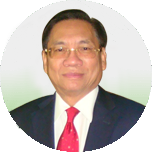 His institution has hosted several ADFIAP events, notably the CEO Forum in 2009 and has received numerous awards from ADFIAP through the annual awards program of the Association. He has been recently designated as a Minister attached to the Prime Minister of Cambodia. Honorary Membership is conferred by ADFIAP to individuals who have performed outstanding services in the field of development banking or who has been closely connected with the profession of development banking and have served the Association for many years.