Posted on May 17, 2011. Filed under Association News. Be the first to comment. 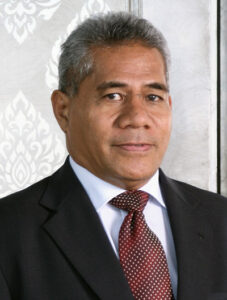 The General Assembly (GA) has conferred an Honorary Membership to Mr. Fuimaono Falefa Lima for serving the Association as Board of Director representing the Development Bank of Samoa (DBS) for many years and as Chairman of the Association from 2008 to 2010.

Mr. Lima worked with the Development Bank of Samoa for 35 years, starting as Loans Officer, became General Manager in the last 19 years. During his term as ADFIAP Chairman, his emphasis was on training and career development of the human resources of development banks. He also advocated the “triple bottom line + governance” as an approach for DFIs amidst the global economic slowdown. He has deep concern for DFIs in small and least developed countries. He graduated with BA degree in Economics from the University of the South Pacific in Fiji in 1975 and obtained a Master of Arts Degree in Development Banking from the American University in Washington, D.C., USA.