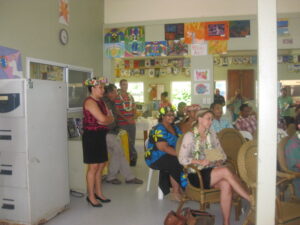 To assist local home owners and small businesses to become more self reliant for energy, Bank of Cook Islands (BCI) recently launched its “Renewable Energy Home Loan” package. The launch was held at the Creative Centre, a local charity workshop which has been using solar energy for its hot water for a number of years now. Attending the launch was the Cook Island Energy Commissioner, along with representatives of the European Investment Bank (EIB), the Minister of Finance and invited clients.

Well received by the attendees, it showed that there was great interest in this alternative to traditional methods of power supply, with a number of enquiries received about taking up the package. As part of the design of the package, local suppliers were contacted to work out the best type of systems, the alternatives that were available for differing situations, the costing for each model and the potential savings in each situation. Additional costs such as installment costs, government fees, loan fees and security registration costs were then added to the various system costs to come up with a total cost. This cost was then worked into a loan scenario to match a borrower’s probable power bill to ensure payments did not exceed their current payments for power.