Posted on August 1, 2015. Filed under Members News. Be the first to comment. 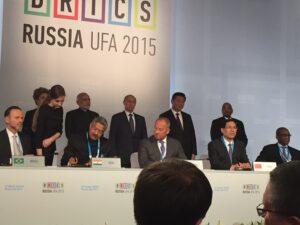 Chairman and Managing Director of Exim Bank of India, Mr. Yaduvendra Mathur, signed a multilateral cooperation agreement, along with Chairmen/Presidents of other member development banks (DB) of BRICS (Brazil, Russia, India, China, and South Africa) nations, expressing their intent to cooperate with the New Development Bank (NDB) promoted by the BRICS nations. The Agreement was signed in the presence of Heads of States/Governments of the BRICS countries on Thursday, July 09, 2015, in Ufa, Russia during the BRICS Summit 2015.

This Agreement is aimed at setting broader agenda for cooperation with the NDB guided by the existing international banking practices; the principles of equality, mutual benefit and responsible financing; and the existing partnership among the BRICS national development banks. The Agreement is expected to enhance cooperation between BRICS development banks and the NDB, individually or collectively, on sharing of information, knowledge and experiences; extending guarantees and counter guarantees; cofinancing; and issuance of bonds, among others.

Mr. K V Kamat, the newly elected First President of the NDB, in his address during the Annual Meeting of BRICS Interbank Cooperation Mechanism, stated that the NDB intends to act in speed, leveraging the strengths of the existing institutional infrastructure in BRICS nations. Cooperating with the national and regional development banks, the NDB intends to speed up the process of project identification, appraisal, and finance delivery, Mr. Kamat, added. Mr. Kamat also stated that the NDB intends to innovate and design new approaches, not only in lending, but also in resource raising.

Mr. Mathur, Chairman, Exim Bank of India, also addressed the Annual Meeting of the BRICS Interbank Cooperation Mechanism, and the Joint Financial Forum of BRICS and SCO organisations, organised by the Vnesheconombank (VEB) as part of the official agenda of the BRICS Summit. In his address, Mr. Mathur stated that the development financial institutions of BRICS nations could play a significant role in regional development in the continents they represent. Further, Mr. Mathur added that BRICS nations are innovative economies, and through cooperation in the sphere of R&D, BRICS as a bloc could become a strong innovation centre for the world.