Posted on June 8, 2015. Filed under Members News. Be the first to comment. 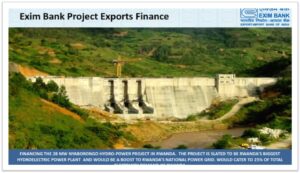 As the premier institution for India’s international trade, Export-Import Bank of India’s (Exim Bank) heart is close to exporters. This is manifested through its “Project Export Finance Facility” that aims to provide Indian companies with not only a comprehensive range of financing options including loans and guarantees, but also information, advisory and support services at all stages of the project cycle.
This initiative played a significant role in catalyzing India’s project exports in 2014 and enhanced the international competitiveness of Indian exporters. It also enabled the Indian exporters to take advantage of the growing project export opportunities, especially those funded by multilateral development banks where such projects also enabled host countries to implement developmental and infrastructure projects.

With Exim Bank India’s ‘Project Export Finance Facility’, Indian companies made an impressive growth in 2014 in a number of areas like civil construction projects, turnkey projects and technical services. Also with the support of Exim Bank, project export contracts valued more than US$3.5 billion were secured by Indian companies during the FY 2014-1015. And at the end of December 2014, 374 project export contracts valued at approximately USD 27 billion supported by Exim Bank were under execution in 78 countries across Asia, Africa, and the CIS by 112 Indian companies.

The ‘Project Export Finance initiative’ of the Export-Import Bank of India won the 2015 ADFIAP Outstanding Development Project Award under the Trade Development Category.