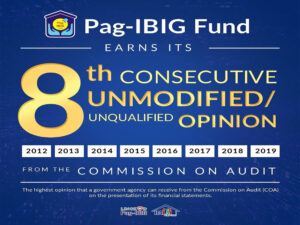 For the eighth consecutive year, Pag-IBIG Fund has again earned the highest opinion from the Commission on Audit (COA) for the presentation of its financial statements, top officials announced on Tuesday (Sept.8).

State auditors, in a letter dated August 28, informed the agency that it has rendered its highest rating – referred to as an unmodified opinion – on the fairness of the presentation of Pag-IBIG Fund’s financial statements for the year 2019.

“This is yet another milestone in Pag-IBIG Fund’s history. Consistently earning the highest opinion from COA for eight consecutive years serves as proof that Pag-IBIG Fund – the Filipino workers’ fund – is being managed properly. We have been true to our promise of upholding excellence and integrity in serving our members and other stakeholders as we heed the call of President Duterte in ensuring that public offices, especially those that provide social services like ours, are corruption-free,” said Secretary Eduardo D. del Rosario, Chairman of the Department of Human Settlements and Urban Development (DHSUD) and of the 11-member Pag-IBIG Fund Board of Trustees.

“We have been saying for several years that we have achieved our best year ever. But 2019 stands out as the most special. In terms of performance, we reached our highest ever net income of P34.37 billion. We also posted a record-highs in housing loan takeout worth P86.74 billion which benefitted 95,276 borrowers, and in short-term loans totaling P53.83 billion which assisted 2.59 million members. With our 2019 performance capped by this unmodified opinion from COA, this shows that we have achieved our best performance ever in terms of both numbers and the integrity in our operations. In 2020, with the economic slowdown, we may not see such record-breaking numbers but two things are for sure – first, the economic slowdown will not stop us from extending benefits to our members and second, is that we will remain transparent in our operations and in serving our members with excellence and integrity,” Pag-IBIG Fund Chief Executive Officer Acmad Rizaldy P. Moti said.